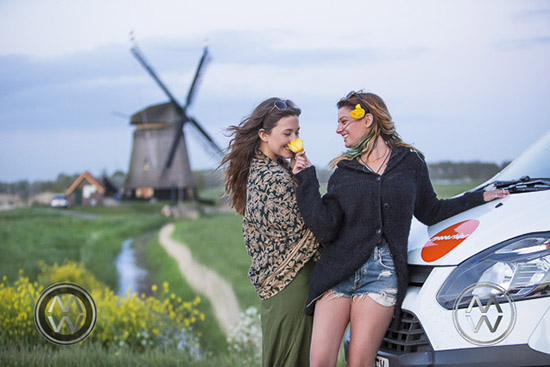 A stunning evening of photography running through tulips and trespassing onto windmill farms, but the photo’s were well worth it.

After running through the streets of Bruges until 3 am, and then getting up at 6am to move the car, it was became a short day today as we traveled from Bruges to Amsterdam. We got in early, found a nice spot to set up camp and caught up on some much needed rest and recovery.  After a little R&R we spent the afternoon heading out of Amsterdam to go in search of the infamous Tulip fields and windmills. As it is the end of the tulip season, we were looking for a little luck, which we found on the way back from the Holland coast of Egmond aan Zee. It turned out to be a stunning evening of photography, running through tulips and trespassing onto windmill farms, but the photos were well worth it! The sunset was late and the second it went down we were rushing to get back to Amsterdam to do whatever one does in Amsterdam. 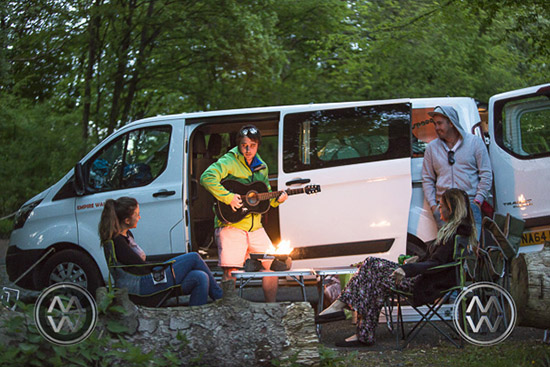 We found a hidden corner on the mountaintop, There were no campgrounds and we had driven too far, so we pulled out the bbq and guitar and called it a night.

A rather uneventful day of driving the lush German motorways… not too exciting sadly, but we wanted to adventure out East. We put in some K’s (kilometers) today. After a very interesting night chilling out in Amsterdam, we attempted to head back into the city for breakfast. A little advice; never, ever, ever, attempt to drive into the city center. There is a reason that bikes are abound. We barely escaped being eaten alive by traffic. We decided to head east and spent the day driving. We went through Holland, Belgium, possibly France and then a long way through Germany.

The German Autobahn was a treat though. Silky smooth roads were great for top speeds in these diesel beasts. Exhausted and nightfall approaching, we were looking for a place just to crash. I was waiting to see where fate would deposit us this evening. In the distance we spotted a mountain range with what looked like a castle perched atop, silhouetted in sunset. Why not? Let’s explore and see if we can sleep there on the mountain top. 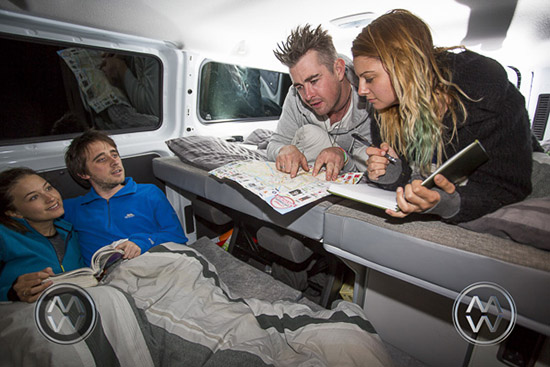 We stopped at the local market and tried to ask about this place. English was not readily available here…just a lot of pointing. We found that we were in the city of Kassel and at the base of the Hercules memorial. The townspeople were very proud of this enormous statue. We found a hidden corner on the mountaintop, but did notice the no camping signs. But, it was too late. There were no campgrounds and we had driven too far, so we pulled out the barbeque and guitar and called it a night, hoping security would not find us in the middle of the night. It really was an amazing spot… nestled in the back parking lot of a vast mountain wilderness. We were quite remote and isolated and most likely camping illegally. We all were thinking the same thing… did the “Human Centipede” or “Hostel” start off on a night just like this? We got cozy in the van and locked the doors up tight. 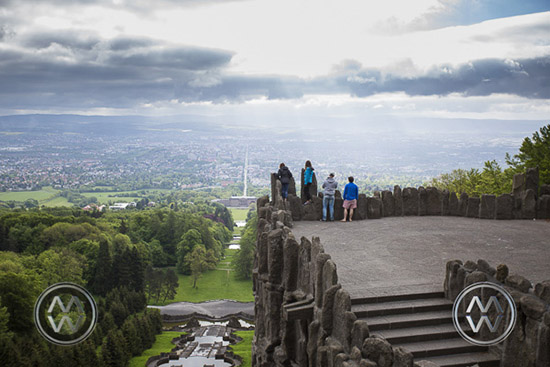 Another freecamping score… we woke up to this stunning mountain forest and had the Hercules monument.

We were not stolen, kidnapped, robbed or raped! Another free camping score. We woke up to a stunning mountain forest and had the Hercules monument and surrounding areas to ourselves. We packed up and headed towards Prague to pick up the final member of our team. On the way through Germany, we popped in to Dresden and found a stunning city and a lively German festival going on. The Germans know how to celebrate a sunny day! 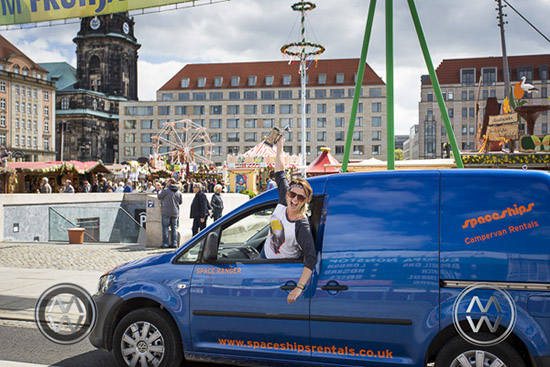 The Germans know how to celebrate a sunny day! 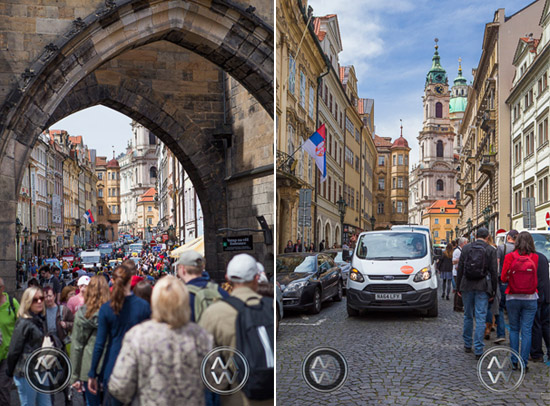 As much as we wanted to stay forever in Prague, we had to move on. It was just too crowded to get anything done. We spent the morning wandering around this stunning city. It’s always one of the hardest places I ever have to leave, but we wanted to push on further east. We wandered and headed south towards Slovakia and explored the Czech experience outside of Prague. I love this country. We stumbled upon a stunning spot in a field of yellow rapeseed and decided to rest up for the night, have a good meal, a good shower and of course bonfire bunnies! 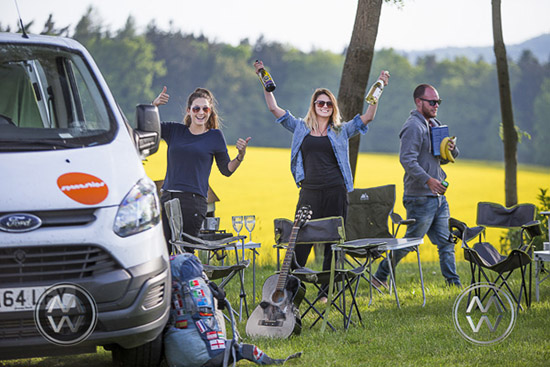 We wandered… we headed south towards Slovakia and explored the Czech experience outside of Prague. 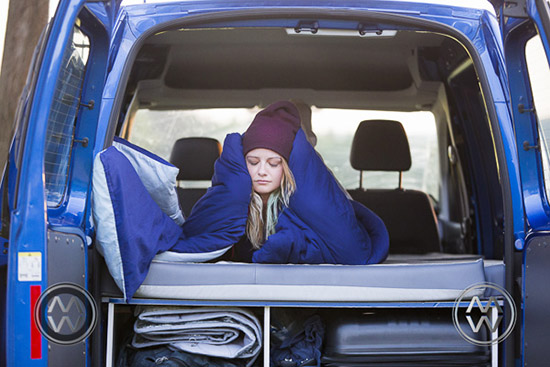 Good morning! Nothing like choosing where you want to sleep and rise again. Waking up to another day on the road…exploring. What story will today’s journey tell? Where does the wind blow? We woke up to the Czech countryside surrounded by a blanket of stunning yellow rapeseed. As I felt every day, I could have stayed here for weeks learning and exploring. But we were headed to a magical town a place called Cesky Krumlov. Better than a Disney fairy tale the last time I visited and this time it must be sadly overrun with tourists….It was not this way on this day. Our luck would hold. Words and Photographs cannot describe the magical feel of this town. We want it for ourselves, to share with someone special…… it’s no secret anymore….but let’s all keep it a secret. I was okay with leaving Prague, but only because this was to be our destination… 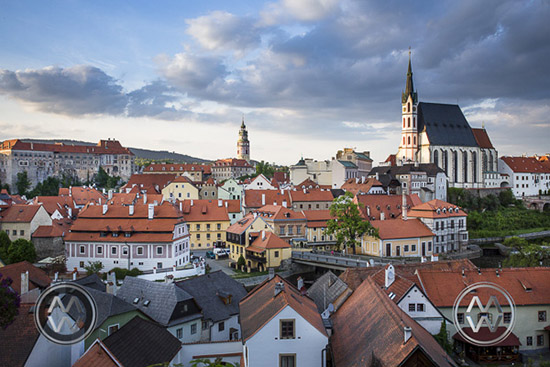 Cesky Krumlov in the Czech Republic.

We headed to a magical land, a place called Cesky Krumlov in the Czech Republic. I was okay with leaving Prague, but only because this was to be our destination. After all these years on the tourist map, it still possible to have this magical city all to yourself. It still amazes me that you can still find places in Europe to have all to yourself and dream. I could not resist a beautiful night to sleep in the streets, cobblestones can be comfy! 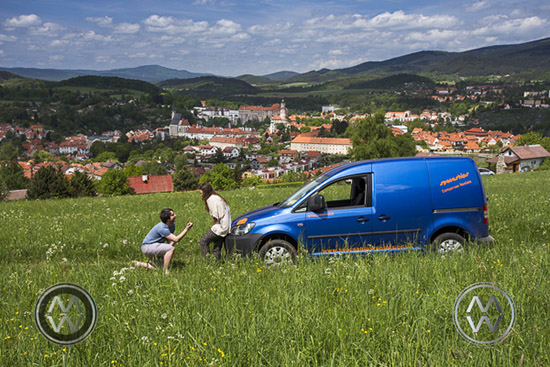 We had an engagement on the trip!! What a place to do it as well. I don’t think the telling of their story will ever grow old. You can follow along more on their story at @travel_beans. This was the perfect excuse to stay another night in Cesky and celebrate. The engaged couple had met a few years back when I traveled with Emma and a group of friends up to Pai in northern Thailand, where she ran into Alex and they immediately hit it off. With their future together resting in the fate of a 1 Thai baht coin, Alex flipped the coin to decide whether or not to follow after Emma and her travels. He chased her around SE Asia and they have been together ever since. This trip marked the start of a 4 year venture traveling together around the world and Alex felt it was suitable to propose in the midst of the fellow travelers and friends that he had met in SE Asia. 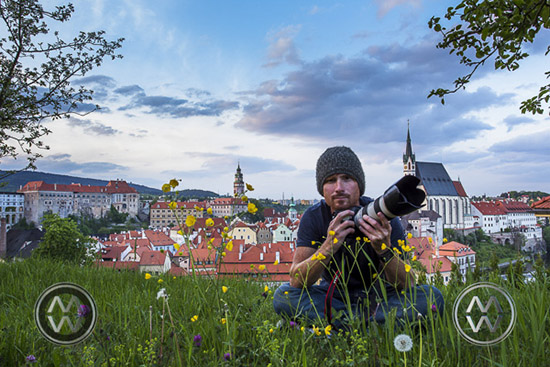 While cruising around during this stunning sunset, flailing about trying to find a spot I had noticed from down in the city below to photograph. A local gentleman drove by, stopped and told me to follow him to his hotel. He was adamant that I follow, with no English, just emphatic gestures I agreed. I kept having flashbacks to the movie Hostel (filmed here), and the chap had an uncanny likeness to the fancy doctor on the train. But why not? He was so incredibly nice and he owned one of the hotels on the hill. He pointed to a spot high up on his property and said the best stop in all of Cesky to take photos and told me I could shoot wherever I liked. I could not resist a little shameless ‘selfie’ at what turned out to be one of my favorite spots from this trip (as you can tell from so many photographs). This experience was such a change from the cold English landowners, which constantly chased us off their well-manicured lawns.

The best part of traveling is the people you meet and the experiences that you share with them, but then this holds true to life wherever you happen to be. 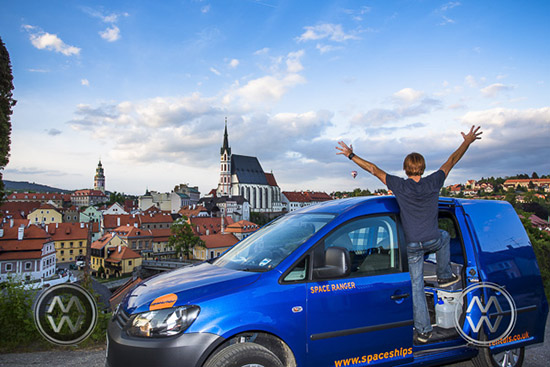 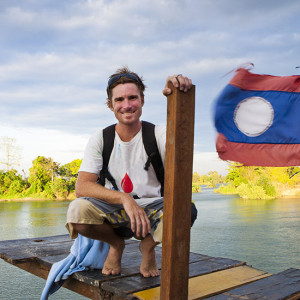 His portfolio can be found at www.mwrightgallery.com

As photography for top tier magazines, television, and film production companies in the world, Micah has traveled extensively through 50+ countries with an eye for tourism trends.

Micah’s impact on the photography world can be seen in over numerous Lonely Planet guidebooks from the past 12 years. Micah’s work is represented by companies such as Getty Images, Lonely Planet, Corbis, First­light, and a variety of other libraries.

Caravan holidays are making a comeback. With the cost of holidays rising, this cheaper alternative is a cost-effective and flexible option for an impromptu weekend getaway. Whatever your age the … END_OF_DOCUMENT_TOKEN_TO_BE_REPLACED

Essential Items for Your Hiking Backpack (Infographic) A well-packed backpack is a key factor in making sure your hike is comfortable, safe and enjoyable. Learn more about how to pack your hiking … END_OF_DOCUMENT_TOKEN_TO_BE_REPLACED

Whether you’re traveling to a local city near your home or across the globe, science shows that traveling can positively influence mental health. In fact, a study by Harris Group found that 72 percent … END_OF_DOCUMENT_TOKEN_TO_BE_REPLACED

I stand above the ocean at Sky Road’s summit and look out over the islands, where folktales say mermaids sit and sing and comb their hair. A group of French tourists laugh amongst themselves. There’s … END_OF_DOCUMENT_TOKEN_TO_BE_REPLACED

It all started with a dream and a decision to let go and trust life. I stumbled upon an image of Taktsang Monastery or Tiger Nest last year but honestly never thought I’d make it to Bhutan. In a … END_OF_DOCUMENT_TOKEN_TO_BE_REPLACED

Essential Items for Your Hiking Backpack (Infographic) A well-packed backpack is a key factor in making sure your hike is comfortable, safe and enjoyable. Learn more about how to pack your hiking … END_OF_DOCUMENT_TOKEN_TO_BE_REPLACED

Doing thing solo, especially hiking solo, is one of the best ways to improve the independence and personal skills. Of course, hiking alone in the wilderness has its risks. Yet, there is no reason … END_OF_DOCUMENT_TOKEN_TO_BE_REPLACED

After a year and a half of one bag travel, I caught the backpack bug—big time. So much so that I started my own website, packhacker.com, where my team and I review backpacks and other gear with a … END_OF_DOCUMENT_TOKEN_TO_BE_REPLACED