You are here: Home / Asia / What is Ethical Elephant Tourism in Asia? 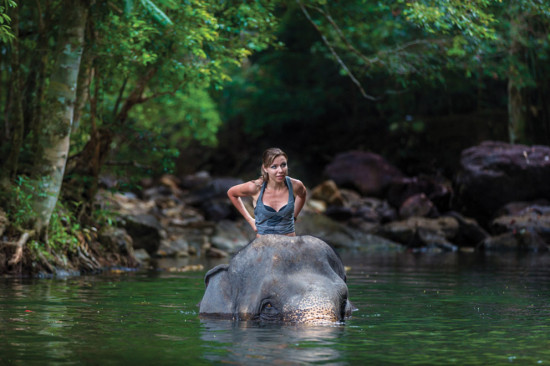 Did you know elephants are highly sensitive and unique creatures and they are deeply social and receptive creatures? Their ears and tusks act as highly sensitive, vibration and sonar receptors that are crucial for migrations through forests and mountainous terrains. Truly magnificent!  In the wild they can usually live for up to 50 to 70 years.  During their lifetime their brain is constantly growing, which means they are always learning new things and really live up to the phrase ‘an elephant never forgets’. Elephant calves stay with their mothers for their entire lives and the interconnectedness of their herds is not only complex but, crucial to individual elephants and to the herd.

My first encounter with wild elephants was in Africa. Although I was very young I can still remember being on safari, driving through the bush for hours and there were no elephants to be seen. Our guide was adamant there were two herds of elephants nearby, but all we could see were the tell-tale signs of fresh dung next to the dirt road. Finally as dusk was setting out of the bright red African sunset, we could see two herds of elephants walking towards each other from opposite ends of the veld. The matriarchs greeted each other by entwining their tusks as if they were long lost sisters. It was one of my most memorable experiences I’ve had travelling. Because of this experience I was very excited to see their Asian cousins on my first backpacking adventure through South East Asia. However, in most of Asia the picture for elephants is a very different one.

There are very few wild elephants left in Asia. Habitat destruction, human encroachment and poaching are the main threats to the Asian elephant’s survival. It is also common for young wild elephants to be captured and sold to amusement parks for the tourism trade. Most elephants in the region particularly in south-east Asia, are either privately owned or belong to a village. Elephants therefore have to earn their keep. They are very large animals and require plenty of food and water. This often means hard labour for them in conditions that are not natural for their physiology, and are often kept under cruel conditions. Tourism in Asia gives elephants a commoditized value. 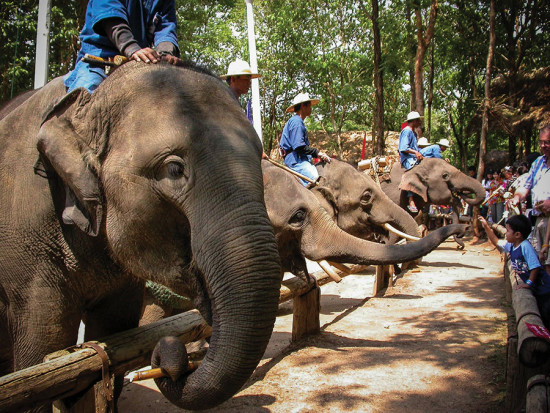 A typical elephant camp experience. Not all camps are bad, but many subject their elephants to cruel training techniques, over working, under-feeding & confinement by chains. All for tourist entertainment!

If it pays, it stays!

Unfortunately many Asian countries believe in the philosophy of, ‘if it pays, it stays’, with regards to wildlife conservation. Asian elephants have only survived this long because there is still a commercial value to their existence. Some of the more common practices of elephant labour that you’ll encounter while travelling throughout south-east Asian countries, include:  begging, trekking, elephant painting and shows. At first encounter this can be quite upsetting and many naïve backpackers often adopt an approach of, ‘let’s just do what the locals do’! But by being informed on the needs of the elephants and not supporting exploitative operators, is the only truly ethical thing you can do as a tourist, and you’ll ultimately do some good in the long run.

Begging is a common practice in Asian cities and it’s common to see elephants begging on the streets in front of temples. These elephants (usually babies), have a reduced life expectancy of about 50%. Starvation, dehydration, toxic exposure from pollution and sensory overload are fatal conditions that are common. City life is very stressful for elephants, who are designed for living in the forest. Begging is very lucrative and although illegal in a lot of countries, cities like Bangkok, Pattaya and Dehli are still the worst culprits.  If you come across begging elephants,  simply do not pay to feed an elephant or for it to perform tricks. Rather buy bananas from the market and toss it on the ground near the elephant to pickup. This way you can insure the elephant is getting some food. 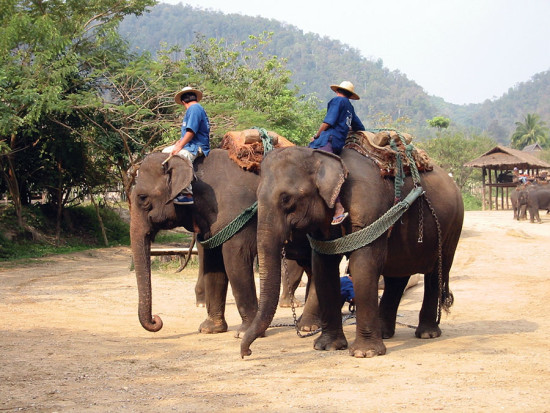 Trekking is a common tourist excursion and the usual packages that are sold include riding on an elephants backs.  The truth is an elephant’s spine is not designed to carry heavy loads. In order to meet the commercial demands from private elephant camps, elephants carry heavy loads for long hours during the day. The constant rubbing from their harnesses damage their sensitive skin, that result in infections. Baby elephants who naturally never leave their mothers side, cannot keep up while their mothers are working. In turn the stress on the mothers, often causes them to stop lactating, and many baby elephants die as a result.

Training elephants for shows and activities such as circus performances, football games and paintings is a very cruel process. Thailand is particularly known for the ‘Phajaan’ or ‘the Crush’.  “The Phajaan process originated in hill tribe communities in India and South East Asia, located in areas where elephants naturally occur. The ‘ceremony’ of Phajaan is said to have originated from the belief that the tribe’s shaman can separate the spirit of an elephant from its body, in effect driving the wilful and wild spirit out of an elephant, and leaving it under the control of its handlers, or mahouts. In reality, however, the Phajaan has nothing to do with the separation of spirit, and everything to do with torturing an elephant until it is so fearful of its human captors, that it will do anything to avoid being hurt again.” (www.phajaan.webs.com) These once sacred animals are subject to a life time of cruel abuse. Common practices that many tourists often do not notice are the use of whips, bull hooks, knives and chaining elephants for long periods of the day. 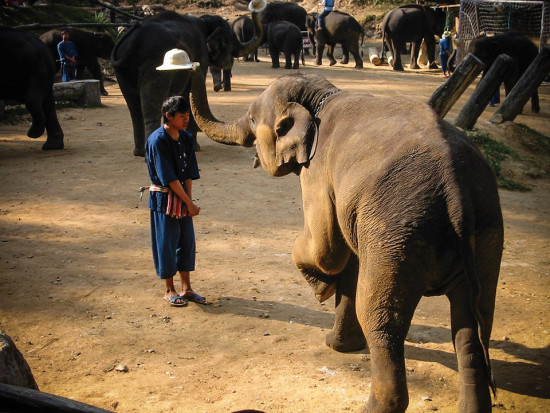 Did you know that Asian elephants are on the endangered IUCN red list?

Elephant paintings were once used as a type of therapy for rescued elephants in sanctuaries and conservation areas. But with the increasing popularity of these paintings, has created an industry and as a result, elephants are forced to paint.  Harsh training methods are employed in order to insure that elephants paint, like driving nails through their sensitive trunks. Unfortunately, ethical elephant tourism is being overshadowed by corrupted and exploitive operators, who not only take advantage of unsuspecting tourists good nature, but hide behind the protection of tradition and cultural beliefs as well.

What you can do while visiting Elephants in Asia

So what can you do while visiting Asia? Like so many other conservation issues around the world finding the right way to support local conservation efforts and still experiencing local culture can be challenging. The simplest approach is to put yourself in the animal’s shoes. It’s easy to rationalize cruel behaviour and separate oneself emotionally from what is the right thing to do. The reality is your money talks! Where you spend your money dictates how locals will treat their wildlife.  Elephants are not the only creatures that are stripped from the wild, put into contained breeding camps, forced to perform shows and chained so that tourists can guarantee a good ‘selfie’, for Facebook. Tigers, monkeys, snakes, birds and bears, are all under the same pressure.

Choose to support projects that provide habitat restoration, rehabilitation and sanctuaries for abused elephants. The issue of Phajaan is equivalent to canned lion hunting in Africa. If you were appalled by the treatment of ‘Cecil the Lion’ in Zimbabwe, then you should be outraged at the treatment of Asian elephants. 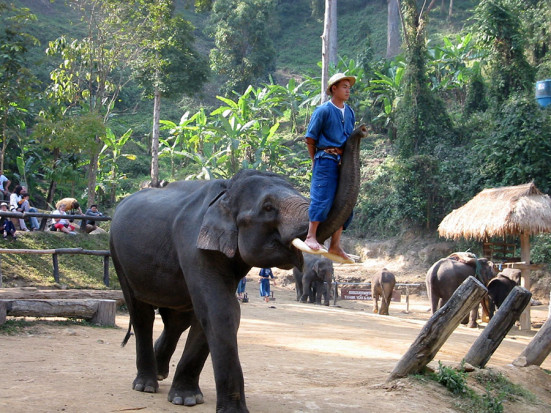 A typical example of an elephant show.

# WHAT CAN YOU DO AS A TOURIST?

1.  Find alternatives to elephant camps!  Your money drives what camps provide and how they treat their elephants.

3. Find retreats that go to forests, rivers and natural landscapes.

4. Learn from other tourists, read reviews and find elephant sanctuaries and retreats.

# ELEPHANT ORGANISATIONS YOU CAN TRUST!

Caravan holidays are making a comeback. With the cost of holidays rising, this cheaper alternative is a cost-effective and flexible option for an impromptu weekend getaway. Whatever your age the … END_OF_DOCUMENT_TOKEN_TO_BE_REPLACED

Essential Items for Your Hiking Backpack (Infographic) A well-packed backpack is a key factor in making sure your hike is comfortable, safe and enjoyable. Learn more about how to pack your hiking … END_OF_DOCUMENT_TOKEN_TO_BE_REPLACED

Whether you’re traveling to a local city near your home or across the globe, science shows that traveling can positively influence mental health. In fact, a study by Harris Group found that 72 percent … END_OF_DOCUMENT_TOKEN_TO_BE_REPLACED

I stand above the ocean at Sky Road’s summit and look out over the islands, where folktales say mermaids sit and sing and comb their hair. A group of French tourists laugh amongst themselves. There’s … END_OF_DOCUMENT_TOKEN_TO_BE_REPLACED

It all started with a dream and a decision to let go and trust life. I stumbled upon an image of Taktsang Monastery or Tiger Nest last year but honestly never thought I’d make it to Bhutan. In a … END_OF_DOCUMENT_TOKEN_TO_BE_REPLACED

Essential Items for Your Hiking Backpack (Infographic) A well-packed backpack is a key factor in making sure your hike is comfortable, safe and enjoyable. Learn more about how to pack your hiking … END_OF_DOCUMENT_TOKEN_TO_BE_REPLACED

Doing thing solo, especially hiking solo, is one of the best ways to improve the independence and personal skills. Of course, hiking alone in the wilderness has its risks. Yet, there is no reason … END_OF_DOCUMENT_TOKEN_TO_BE_REPLACED

After a year and a half of one bag travel, I caught the backpack bug—big time. So much so that I started my own website, packhacker.com, where my team and I review backpacks and other gear with a … END_OF_DOCUMENT_TOKEN_TO_BE_REPLACED