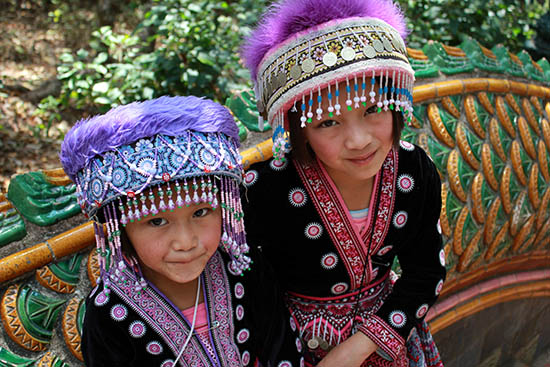 Chiang Mai is turning out to be one of the trendiest cities in South East Asia. Located in the beautiful north eastern part of Thailand, Chiang Mai attracts over five million visitors a year with many choosing to stay long-term. But what is it about the city that has people raving about it, and coming back year after year? 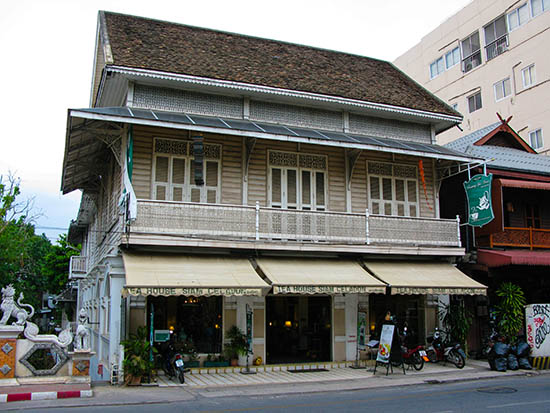 At first glance Chiang Mai looks like any typical Asian city, with a kaleidoscope of colour, bustling traffic, massage parlours on every corner, street food and friendly locals. Northern Thailand has a very different feel from the rest of Thailand. For anyone who has travelled north by train from Bangkok and experienced the long dusty central plains of Thailand, on arrival you can appreciate the cool air, gentler paces, all set against a backdrop of forested, limestone hills. 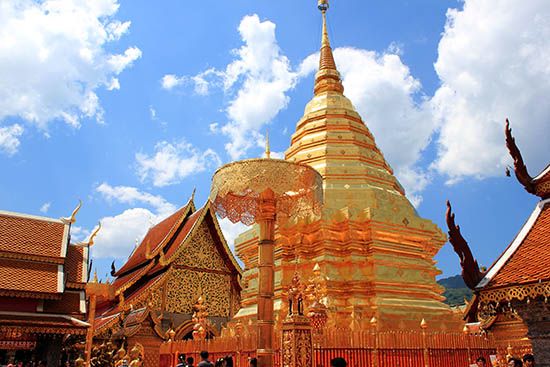 A Brief History of Chiang Mai… 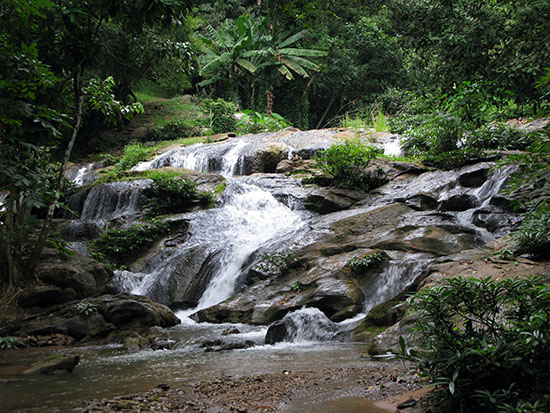 The northern region was not part of Thailand until the early twentieth century. Previous to becoming part of the larger Siam Kingdom, it was governed by a series of principalities. The people in the area were a mixture of Lana, Burmese and many different Hill Tribes, all with their own distinct culture. The history of Chiang Mai is still evident in its remaining temples, chedis (or stupas, as they are known in other Buddhists countries), and of course the iconic moat walls that dominate the city today. 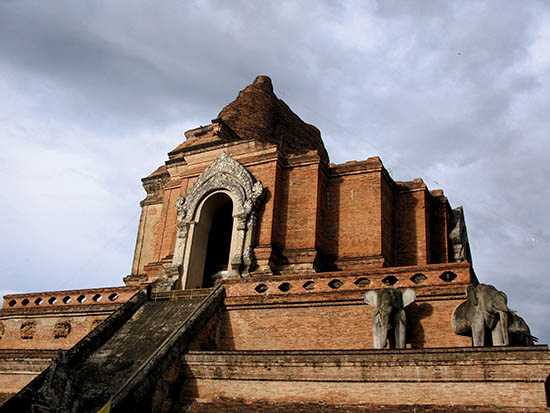 The moat was built sometime in the 19th century as a defensive wall. In fact, up until the mid-20th century, foreigners had to remain outside of the walls and remain on the other side of the Ping River. That is why today you’ll find most of the early Chinese, British and American settler influences around the river.

This includes the now bustling Warorot Market, the Iron Bridge (which was built by a British entrepreneur, who was worried about his wife having to cross the river Ping, by boat for groceries), a few Christian schools, (French, catholic and American) and an old Christian burial ground, that is still used by expats today. 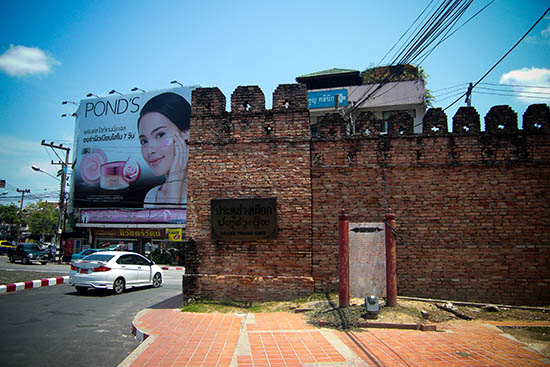 Walking along the moat at Chang Phuak Gate – Chiang Mai 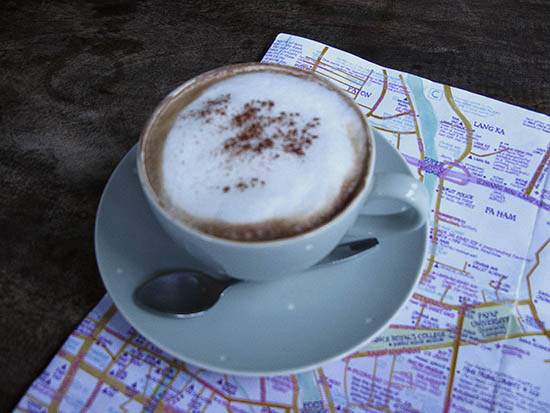 The ‘old city’ as it is called today, is everything within the old moat walls It is bustling with foreign tourists and plenty of guest houses, restaurants, many temples, museums, markets, tour operators and a hub of activity. The moat and its four gates will become central to navigating around the city. Use the city’s main gate, Thapae Gate, as a central point, which is located on the eastern side of the city and faces the river Ping. To the south, is Chiang Mai Gate, west is Suan Dok Gate, and north is Chiang Phuak Gate. 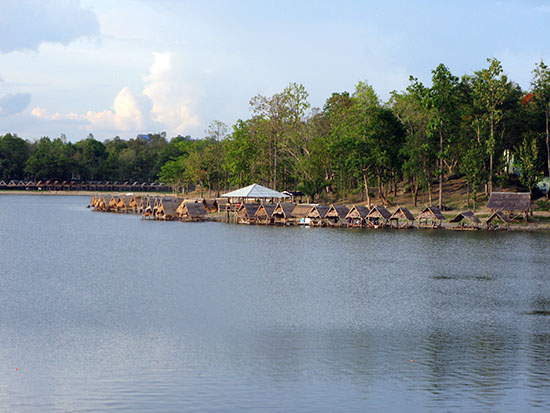 Depending on how much time you have, try not to spend it all in the ‘old city’. Although there is plenty to keep you occupied for weeks. The two most distinct features are the Ping River, and the mountain Doi Suthep. The mountain is the city’s natural and spiritual oasis, and there is nothing more exhilarating than heading up the windy road on your motorbike, into pristine rainforest.

Here you can explore one of Thailand’s iconic temples, ‘Wat Phra That Doi Suthep’, and also take in hidden Hill Tribe villages, waterfalls and indigenous wildlife. Travelling out of the city to explore the outlying areas is fairly easy. The ‘Green Bus’ which mostly deals with northern transport routes, is affordable and goes to emerging backpacker hotspots, such as Pai, Mae Hong Son, Payao, and Chang Dao. 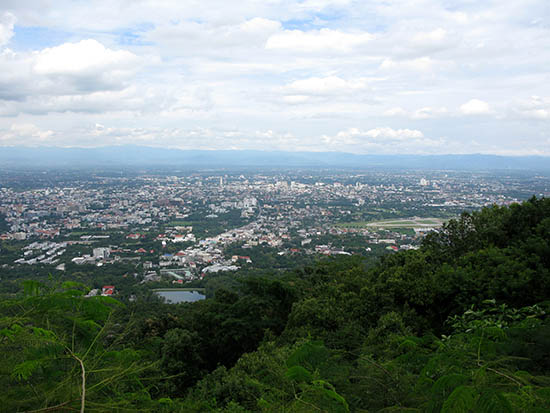 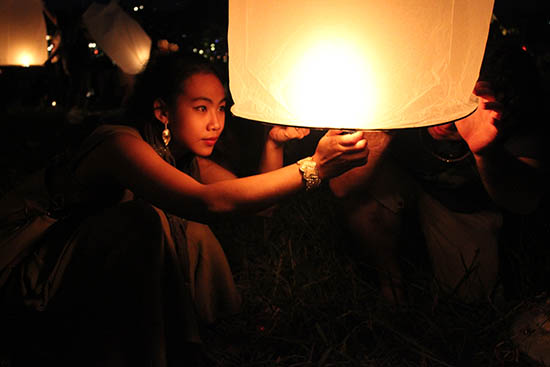 In Thailand the locals believe that if you stop having fun, then your soul will leave your body! The residents of Chiang Mai take this very seriously, and this is probably why you have two of the most iconic and fun festivals in the world. Songkran is held in April after the long, hot, smoky season, and the start of the Thai New Year. What better way to celebrate the hottest month of the year and bring in good blessings, is by having the world’s largest water fight that lasts for five days! Tourists, monks, babies, aunties and grandparents alike, all get involved. In fact, so much water is thrown around Songkran, that it can create its’ own localised rainfall. 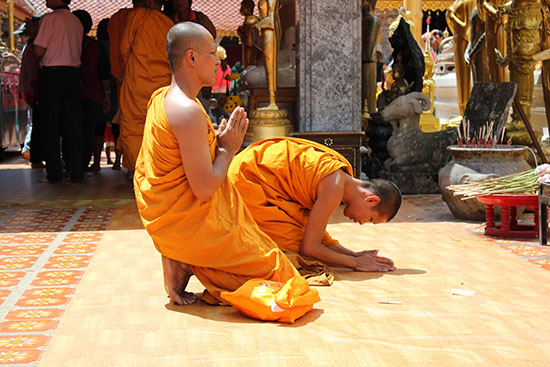 My personal favourite Chiang Mai festival held in November, is Ye Peng and Loi Krathong. Otherwise known as the ‘Lantern Festival’. Whether you choose to attend the massive single release of lanterns at the Lanna Dhutanka grounds, behind Mae Jo University, or just light lanterns with friends around the city and along the river – the experience will be unforgettable. There is nothing more beautiful than watching thousands of lanterns fill the clear night sky, with the city’s temples glowing in gold, as a backdrop. 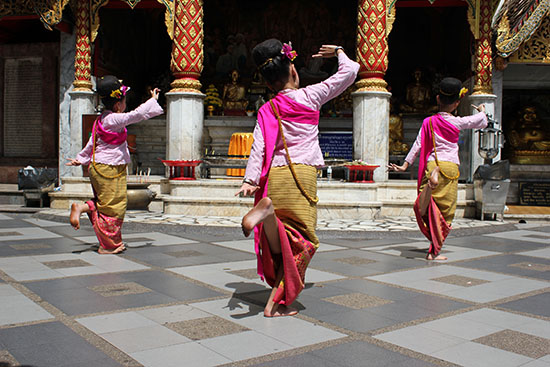 Traditional dancing in front of a shrine at Wat Phra That Doi Suthep – Chiang Mai. 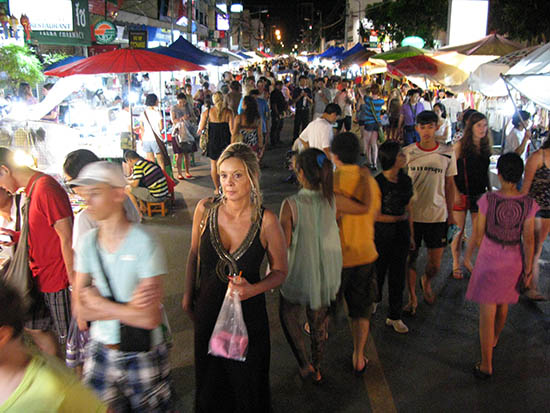 Chiang Mai is known for producing the best arts and crafts in the country. The Sunday Walking Street market is rated the top five in Thailand, and the daily ‘Night Bazaar’ a close second. On Saturdays it’s worth exploring the ‘Second Hand Market’ near the bus station, and the ‘Saturday Walking Street Market’ in the silver district. The city is also dotted with numerous little markets, ranging from wet markets, organic food markets, French bread markets, and of course the distinct Warorot Market, in Chinatown – just to name a few! 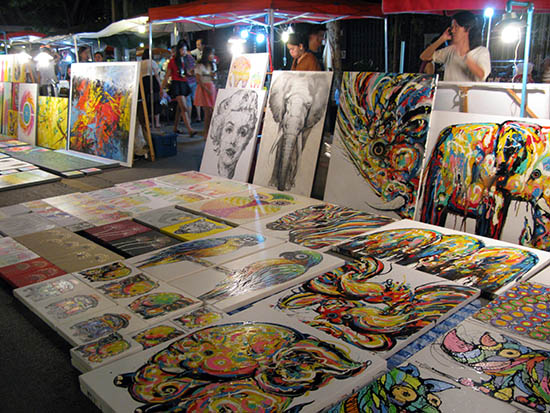 Why travellers can’t get enough… 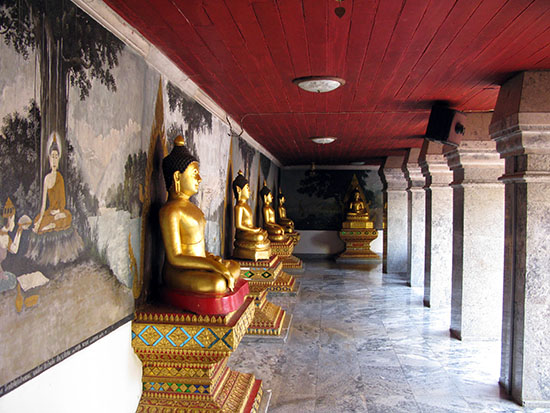 Often referred to as ‘SABAI-SABAI’ (easy going), there is a definite vibe and attitude that allows for a lot of creative and personal freedom. It’s no wonder that Chiang Mai attracts artists, writers, ‘digital-nomads’, musicians and food enthusiasts from around the world. Chiang Mai is also a very safe city. The crime rate is low and it is generally safe to walk around late at night. 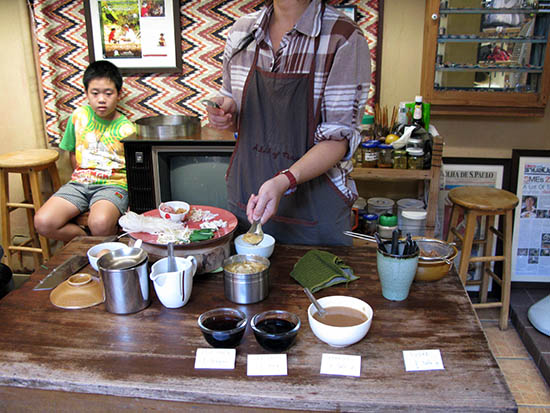 Learning to cook in Chiang Mai.

Chiang Mai is a ‘creative city’ and you can see it on every corner. Locals have a wonderful way of modernising iconic, vintage styles, with a typical Lanna touch. This is evident in the clothes they wear, and prevalent in the many coffee shops dotted around the city. Chiang Mai has the ideal climate for open air cafés. With an abundance of excellent, cheap locally grown Hill tribe coffee, you are never far from a good “cuppa”. Most cafés offer free WIFI, which makes them ideal places for resident digital nomads to work from, and meet up with friends. 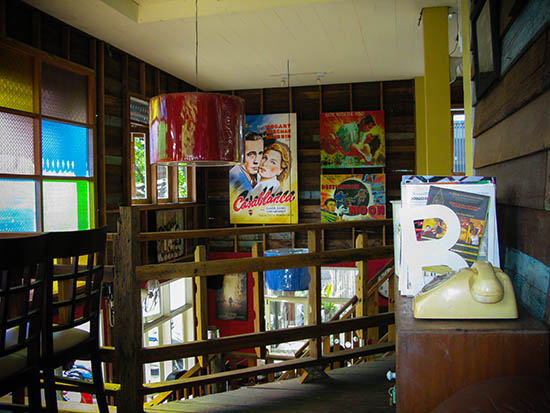 It has a lively arts and jazz scene, along with being a nature and adventure sports hub. Chiang Mai has also become a centre for doing educational courses, like Thai massage, yoga, tai chi, language courses, cooking and even self-defence. The city is also a spiritual mecca and many Buddhists from around the world, come to learn about Vipassana Buddhism. Therefore there is always something to keep you coming back for more! 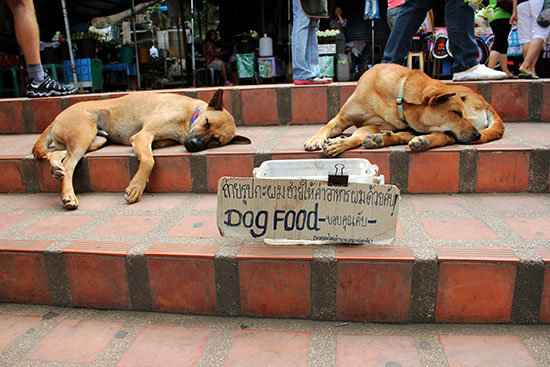 Wat dogs on the steps of Wat Phra That Doi Suthep – Chiang Mai.

Caravan holidays are making a comeback. With the cost of holidays rising, this cheaper alternative is a cost-effective and flexible option for an impromptu weekend getaway. Whatever your age the … END_OF_DOCUMENT_TOKEN_TO_BE_REPLACED

Essential Items for Your Hiking Backpack (Infographic) A well-packed backpack is a key factor in making sure your hike is comfortable, safe and enjoyable. Learn more about how to pack your hiking … END_OF_DOCUMENT_TOKEN_TO_BE_REPLACED

Whether you’re traveling to a local city near your home or across the globe, science shows that traveling can positively influence mental health. In fact, a study by Harris Group found that 72 percent … END_OF_DOCUMENT_TOKEN_TO_BE_REPLACED

I stand above the ocean at Sky Road’s summit and look out over the islands, where folktales say mermaids sit and sing and comb their hair. A group of French tourists laugh amongst themselves. There’s … END_OF_DOCUMENT_TOKEN_TO_BE_REPLACED

It all started with a dream and a decision to let go and trust life. I stumbled upon an image of Taktsang Monastery or Tiger Nest last year but honestly never thought I’d make it to Bhutan. In a … END_OF_DOCUMENT_TOKEN_TO_BE_REPLACED

Essential Items for Your Hiking Backpack (Infographic) A well-packed backpack is a key factor in making sure your hike is comfortable, safe and enjoyable. Learn more about how to pack your hiking … END_OF_DOCUMENT_TOKEN_TO_BE_REPLACED

Doing thing solo, especially hiking solo, is one of the best ways to improve the independence and personal skills. Of course, hiking alone in the wilderness has its risks. Yet, there is no reason … END_OF_DOCUMENT_TOKEN_TO_BE_REPLACED

After a year and a half of one bag travel, I caught the backpack bug—big time. So much so that I started my own website, packhacker.com, where my team and I review backpacks and other gear with a … END_OF_DOCUMENT_TOKEN_TO_BE_REPLACED