You are here: Home / Backpacker / Ikaria – Volunteering on a Timeless Greek Island 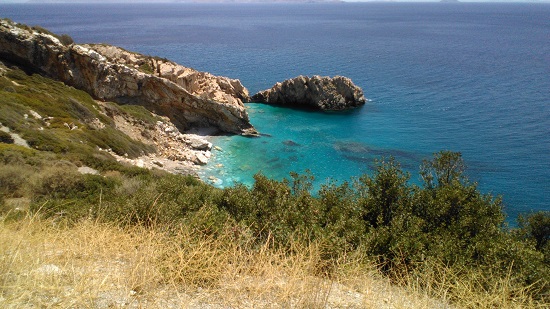 ‘I wished our first meeting hadn’t started an hour and a half late…at least not the very first one!’

Mihalis laughed, pointing to an invisible watch on his hairy wrist. ‘This isn’t the kind of Greece you know…time doesn’t exist in Ikaria!’ His explosive laugh caused us, the foreign volunteers, to pause with our buttered homemade bread slices halfway to our mouths.

Later that day, Mihalis called out for help from a height, making me think he had a flat tire. But once I reached the top of the hill, I saw his van’s rear wheels were dangling into nothingness. My body froze – petrified – and I remembered a sentence I had heard during my previous travels in Greece: ‘in Ikaria, people don’t know the meaning of the word stress’. 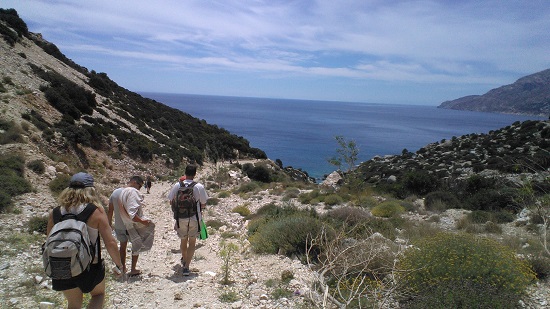 On our way to the beach

It was a boring Sunday at work when I came across an article about volunteering to clean mountain pathways on the island of Ikaria. Between the islands of Samos and Mykonos, in the middle of the Aegean Sea, Ikaria seemed the perfect spot to spend a month immersed in rough nature. I wanted to help people working manually, and I liked the idea of getting my hands dirty with soil – something totally different from my usual 9-5 stressful office life in super productive Holland.

This is how I became one of the five volunteers who joined the Monopatia Project in June 2016, together with Suzanne – an Hellenophile German translator, a couple of backpackers from Australia – Will and Rachel – and Adam, a Londoner with a passion for the Mediterranean mountains. We shared four weeks hosted in the Greek language school which Mihalis has been owning and directing for 20 years. The accommodation provided was shared dorms with en suite bathrooms.

‘Many a tourist ventures in the mountains without a local guide and are unable to find their way out. Some have died, falling from ravines hidden by knots of inextricable forest’ Mihalis told us during our first meeting. This was the reason behind the project: to clear wild mountain pathways, and map a net of trails to promote a safe hiking experience. 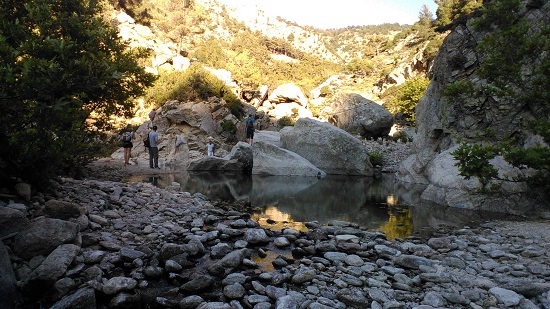 For four weeks, we rose every morning at 7. Helped by a handful of locals, the first path from the mountain village of Arethousa to the fishermen’s village of Karavostamo was cleared in just two weeks. It’s a 4 km walk framed by lupines, blackberries, olive and plane trees with a river valley meandering along the path. On the third week, Adam and Will mapped the route with a GPRS and uploaded it onto Google maps, while Rachel and I designed and distributed leaflets to some local businesses. Lastly, we all cut and painted red wooden signs and put them up along the paths. 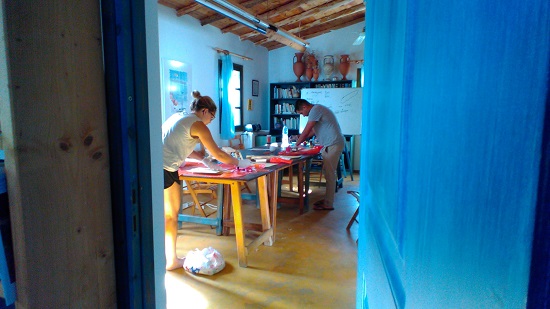 Our hard work was generously repaid. We had speed Greek lessons taught by Mihalis, and by the fourth week, we were all able to order a meal in Greek. We spent late afternoons winding down at the beach and swimming in transparent waters. We travelled to historical sites, like the notorious temple of the Greek Goddess Artemis, located in Nas. Notable highlights were the Ikariotiko dance lessons held on the terrace of the school from which we could see the sunset turning the island of Samos and Turkey into pure gold. Not to mention the mouth-watering dinners sponsored by local tavernas. Moustached owners seemed to fight to get the ‘kind foreigners working hard for the island’ sitting on their porch every night.

Lunch and smiles after a morning at work

When Mihalis’ string trimmer broke, it was another chance to see how Ikarians manage stress. At first he laughed, and then he admitted he had no money to buy a new one. ‘When I don’t have what I need, I go to the Cafè Neo, order a coffee and wait for the right person to show up’. And this was exactly how we solved the problem. After few iced frappes, a wrinkled white-haired builder phoned his cousin who had a brand new trimmer to lend to us.

‘We need to rely on each other and live with what we have…this requires patience’ said a local called Elias, an ex-History teacher at the University of Athens. With him, our dinners often turned into unexpected Ikarian philosophy lessons. I remember listening to his words while a huge tray with a steaming pastitzio – the Greek and more-meaty version of lasagne, shaped like a Babel tower – facing a group of fifteen locals and us, the foreigner volunteers. Sitting on the taverna’s terrace, we had already emptied a few bottles of thick red wine when the sunset surrendered to darkness in a slow motion changing spectrum of colours. From orange, to red, then fuchsia, the horizon turned into a thin violet line hanging upon an almost undetectable sea. 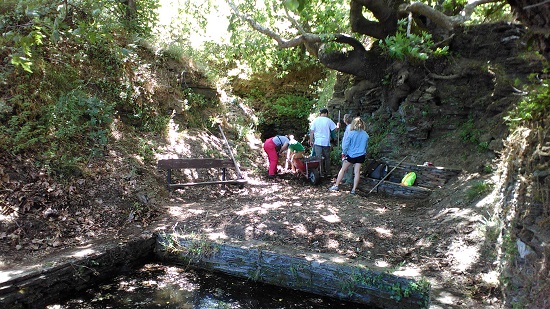 After four weeks, we completed the second path from Karavostamo to Aris Potamos, and our last night on the island coincided with the ‘12 Apostles’ Panigiria’. Panigiria is a traditional Greek celebration which involves red wine, grilled meat, and dancing lasting from the afternoon to the morning after. That night, the Pedi village square was busy with tables where guests sat randomly. A small stage hosting a local folk group (a violin, a mandolin-like Greek guitar called bouzoki, and a classic guitar) was playing next to the BBQ area. We were soon dancing in circles mixing with the locals, stepping forward and then backwards, some men were snapping fingers…opa! 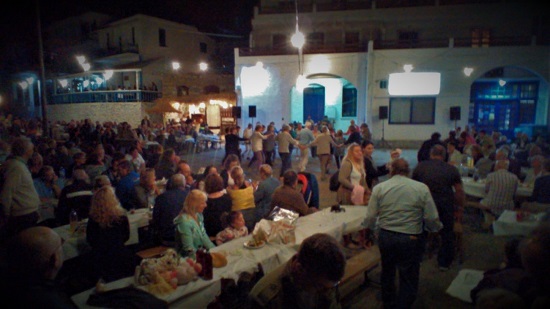 Panigiria are known as the best in all of Greece. The biggest one is on August 15th, dedicated to Virgin Mary

The last sunrise popped out from behind the little white houses as red as a pomegranate. It was there I realized time had passed by. By noon, without even having touched my bed, I was tossing out T-shirts and shorts because they either had holes, were torn, or were stained with paint.

‘I thought we’d have had more time to rest…now I need a holiday from my holiday!’ said an unusually relaxed Suzanne. She picked up her steel banded round watch from the bedside table and scanned it. ‘I still have some time in Greece’ she said – and burst out in a laugh, then tossed the watch inside her gigantic yellow suitcase. 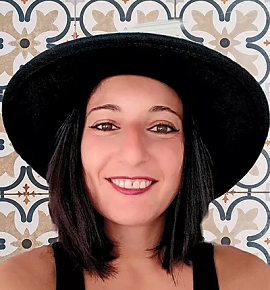 I am a 35-year-old Italian globetrotter, currently based in Lisbon and working as a tour guide. I left Italy in 2010 to experience the world by either living in new countries, backpacking or volunteering. I have been travelling to Greece since my 18 years old on an almost yearly basis, and I’m really proud of my far (far, far!) Greek roots. I wrote my first poem when I was 8 years old, and I’m currently looking for a publisher for my first experimental poetry book.

Caravan holidays are making a comeback. With the cost of holidays rising, this cheaper alternative is a cost-effective and flexible option for an impromptu weekend getaway. Whatever your age the thrill of a caravan holiday is hard to beat. Still not convinced? We’ve put together 8 reasons why you should go on a caravan holiday. […]

Essential Items for Your Hiking Backpack (Infographic) A well-packed backpack is a key factor in making sure your hike is comfortable, safe and enjoyable. Learn more about how to pack your hiking … END_OF_DOCUMENT_TOKEN_TO_BE_REPLACED

Whether you’re traveling to a local city near your home or across the globe, science shows that traveling can positively influence mental health. In fact, a study by Harris Group found that 72 percent … END_OF_DOCUMENT_TOKEN_TO_BE_REPLACED

I stand above the ocean at Sky Road’s summit and look out over the islands, where folktales say mermaids sit and sing and comb their hair. A group of French tourists laugh amongst themselves. There’s … END_OF_DOCUMENT_TOKEN_TO_BE_REPLACED

It all started with a dream and a decision to let go and trust life. I stumbled upon an image of Taktsang Monastery or Tiger Nest last year but honestly never thought I’d make it to Bhutan. In a … END_OF_DOCUMENT_TOKEN_TO_BE_REPLACED 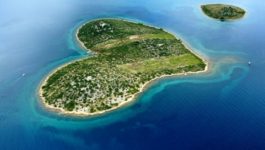 This is my story of a summer vacation in Croatia last year. Me, my girlfriend and parents went to a place where my father had a small camper house. We took a long vacation and experienced a lot of new … END_OF_DOCUMENT_TOKEN_TO_BE_REPLACED

Essential Items for Your Hiking Backpack (Infographic) A well-packed backpack is a key factor in making sure your hike is comfortable, safe and enjoyable. Learn more about how to pack your hiking … END_OF_DOCUMENT_TOKEN_TO_BE_REPLACED

Doing thing solo, especially hiking solo, is one of the best ways to improve the independence and personal skills. Of course, hiking alone in the wilderness has its risks. Yet, there is no reason … END_OF_DOCUMENT_TOKEN_TO_BE_REPLACED

After a year and a half of one bag travel, I caught the backpack bug—big time. So much so that I started my own website, packhacker.com, where my team and I review backpacks and other gear with a … END_OF_DOCUMENT_TOKEN_TO_BE_REPLACED